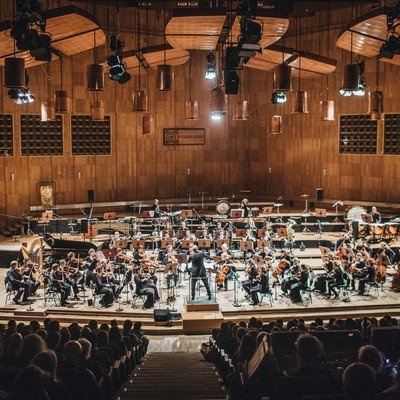 Musik am Puls der Zeit, Basel-Stadt – The Basel Sinfonietta is a full symphonic orchestra specializing in contemporary music. Both its musical profile and its democratic autonomy make... Read Biography

Since its founding in 1980, the Basel Sinfonietta, driven by its commitment to performing music in tune with the times through commisioned works, world premieres and Swiss premieres, has transcended the boundaries of classical concert conventions and captured international attention with daring programs packed with contemporary music, multimedia and performance.

The Basel Sinfonietta is an autonomously-managed orchestra. Owing to its structure as an association, all musicians are able to participate in the democratic decision-making process concerning the directional focus and programming of the orchestra.

Highlights of the 2020/21 season include guest performances at the Musikfestival Bern and the Festival Musica in Strasbourg; the collaboration with the composers Georg Friedrich Haas, Christian Wolff, Jesper Nordin and Simon Steen-Andersen; with the pianist Nicolas Hodges, trumpet player Marco Blaauw and drummer Jojo Mayer; and with conductors Lin Liao, Ilan Volkov, Peter Rundel and Roland Kluttig.

The Basel Sinfonietta is financially supported by e.g. the cantons of Basel-Stadt and Basel-Landschaft.

Registered since over 3 years
Last login on 9 August 2022