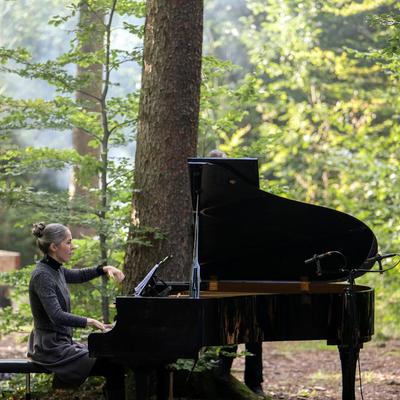 Composition, Solo, Zürich – The Swiss pianist Simone Keller (* 1980) completed her training in the concert class of Hans-Jürg Strub at the Zurich University of the Arts. In... Read Biography

The Swiss pianist Simone Keller (* 1980) completed her training in the concert class of Hans-Jürg Strub at the Zurich University of the Arts. In addition, she attended master classes with Andrzej Jasinski, Siegfried Mauser, Karl Engel and Hartmut Höll. She has received several prizes, awards and scholarships, such as first prize at the Landolt Competition for Piano, second prize at the Hans-Ninck-Competition for Piano, and the EMCY Chamber Music Award at the European Classic Festival Ruhr.

Simone Keller performs as a soloist and chamber musician in a wide variety of formations and styles, with lively concert activity in Switzerland and many other countries. In recent years, she has appeared at the New Music Week in Shanghai, the Roulette and Symphony Space in New York, Constellation in Chicago, Opensound in Boston, CCRMA in San Francisco, Sonic Arts Exchange in Seoul, Hong Kong and Macau, at Fondation Suisse and Cité Internationale des Arts in Paris, Days for New Music in Bucharest, Kölner Philharmonie, Konzerthaus in Vienna, Weimarer Frühjahrs­tage, Mozarteum in Salzburg, Klangspuren in Schwaz, Megaron in Athens and the Imatronic Festival for Electronic Music at ZKM Karlsruhe, in Switzerland in Tonhalle Zurich, KKL Luzern, Dampf­zentrale Bern, Studio Ernest Ansermet in Geneva, Gare du Nord Basel, Schloss­konzerte in Thun, Davos Festival and Klavierissimo Wetzikon.

Since 2007, Simone Keller has been a member of the ENSEMBLE TZARA (www.ensembletzara.ch), which was awarded the Zurich Werkjahr in 2012. In addition, she plays in many other formations, such as Retro Disco, which in the past few years has starred in premieres by Robert Ashley and Alvin Lucier, the Trabant Echo Orchestra, a quintet with strings and drums playing minimal music such as "In C" by Terry Riley or Kukuruz Quartet (www.kukuruzquartett.ch) which features four pianists and sheds new light on the music of Julius Eastman. Kukuruz Piano Quartet has presented its programs in all over Europe with great success and to broad critical acclaim. Some of the places where the Quartet has performed include Documenta 14 in Athens (Megaron Concert Hall), Volks­bühne Berlin and Schau­spiel­haus Zurich.

Simone Keller regularly performs as a guest artist at the Musik­kollegium Winterthur and the Süd­west­deutschen Philharmonie and was invited by Ensemble Contre­champs from Geneva, the Austrian Ensemble for New Music, the Glassfarm Ensemble New York and the Hong Kong New Music Ensemble. From 2006 to 2014, she worked extensively as a guest musician of the Collegium Novum Zürich and with conductors such as Peter Rundel, Jonathan Stockhammer, Pablo Heras-Casado, Peter Ruzicka, Peter Hirsch, Heinz Holliger and Johannes Kalitzke. From 2008 to 2016 she was a permanent member of the Ensemble TaG for New Music in Winterthur, with whom she participated in numerous premieres of particularly rare works of composers.

2014 Simone Keller and Philip Bartels founded ox&öl (www.oxoel.ch) a music and theatre company which also develops the latest forms of education projects for children and adults, such as the Intergenerationen-Musikwerkstatt "Piccolo Concerto Grosso" which was developed in collaboration with the Lucerne Symphony Orchestra. ox&öl received several charity awards for their campaigns.

In 2019 Simone Keller is nominated for the international innovation award from Classical:NEXT.