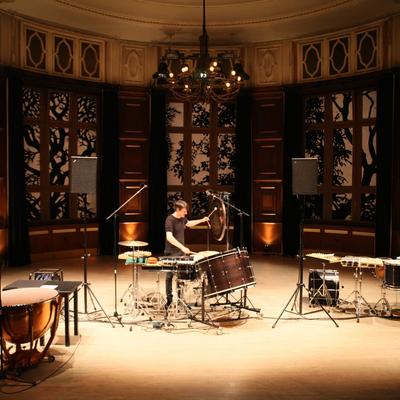 Interdisciplinary, Multimedia, Zürich – Since 1999, Martin Lorenz has worked as a freelance percussionist on the contemporary and experimental music scene and has realized solo and... Read Biography

Since 1999, Martin Lorenz has worked as a freelance percussionist on the contemporary and experimental music scene and has realized solo and chamber music projects with assorted partners: with Sebastian Berweck, with Conrad Steinmann, with Simone Keller, with Teodora Stepancic and others. These partnerships have resulted in collaborative projects with composers such as Annesley Black, Antoine Chessex, Luc Döbereiner, Hugues Dufourt, Edu Haubensak, Virgil Moorefield, Bernhard Lang, Daniel Weissberg and Alfred Zimmerlin, whose works Martin Lorenz has premiered. Between 2002 and 2015 Martin Lorenz was a member of the ensemble Collegium Novum Zurich. This collaboration is documented in many recordings, in particular the concert for percussion "Wer, wenn ich schriee, hörte mich..." by Georg Friedrich Haas, conducted by Enno Poppe.

Martin Lorenz began to use electronics to complement his arsenal of percussion instruments, and thus expanded his spectrum of expressive forms towards installation work and music on the fringes of alternative club culture. To release these works Lorenz founded his own label Dumpf Edition. This versatile approach is also characteristic of his work as a composer; his oeuvre includes solo and ensemble pieces, written for collaboratibe ensembles such as Ensemble werktag Zurich or Ensemble für Neue Musick Zurich. He worked together with the theatre director Johannes Müller for Sophiensaele, Berlin and the collective Schauplatz International for HAU1, Berlin. For his work as a composer Martin Lorenz was awarded with the Werkbeitrag des Aargauer Kuratoriums 2010 and the Werkjahr für Komposition der Stadt Zürich 2016.

Registered since over 1 year
Last login on 25 August 2022