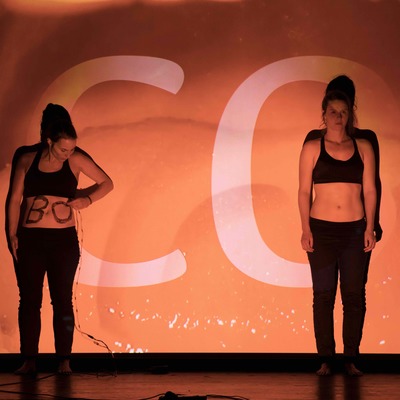 Interdisciplinary, Performance, Solothurn – The swiss duo eventuell. was founded in 2015 by Manuela Villiger and Vera Wahl. These young musicians passionately dedicate themselves to... Read Biography

The swiss duo eventuell. was founded in 2015 by Manuela Villiger and Vera Wahl. These young musicians passionately dedicate themselves to contemporary music and its adequate performance. As an open-minded and experimental duo, eventuell.‘s performances are not limited to saxophone works, but to any kind of art performance including live electronic devices, light and video staging. In addition to the auditive dimension, the duo is seeking to provide a further visual dimension to its audience and create a visual space to the musical performance. eventuell. is pursuing the making of a unique statement through its performances. The young musicians not only deal intensively with the questions of their themes but also try to confront the audience with complex questions about society and look for personal answers to the questions raised. Besides writing their own pieces, the performers collaborate closely with associate artists and renowned composers on new works and ideas. Throughout the creating process of a new work the ensemble gathers new impulses from other artists and has the chance to premier a multitude of new works by composers such as Jorge Sanchez-Chiong, Emilio Guim, Julian Siffert or Loïc Destremau. In 2019 the duo launched with „eventuell. connected“ a new concert concept in which the duo intensifies its collaboration with promising young composers and premiers every year a whole program written by two international composers.

Both instrumentalists shared their musical education studying together music pedagogy in Lucerne (Switzerland) with Beat Hofstetter and Sascha Armbruster and later finishing their Master’s of Arts in Music Performance at the Zurich University of Arts in the class of Lars Mlekusch. The canton of Solothurn granted them a promotion award to enhance their musical development as an ensemble.

Registered since over 2 years
Last login on 28 February 2022