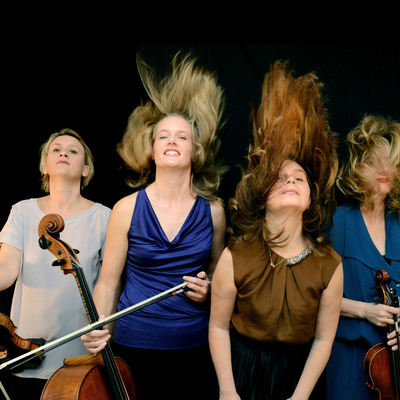 Building Bridges from..., Basel-Stadt – "Boldly building bridges" is how the Mondrian Ensemble was described when awarded the Swiss Music Prize in 2018. Spinning threads that run through... Read Biography

"Boldly building bridges" is how the Mondrian Ensemble was described when awarded the Swiss Music Prize in 2018. Spinning threads that run through music history regardless of grown trenches, the exploration of new and newest music is just as important to the musicians as their engagement with the classic-romantic repertoire. The ensemble has been captivating audiences for almost 20 years with a courageous mix of classical and contemporary music, constantly confronting listeners with surprising combinations. Founded in Basel in 2000, the Slovak-Austrian-Swedish-Georgian quartet have made a valuable contribution to the Swiss music scene. Significant works have been dedicated to the ensemble by composers such as Dieter Ammann, Jürg Frey, Jannik Giger, Klaus Lang, Thomas Wally and Martin Jaggi, co-founder and long-time cellist of the ensemble. CD recordings at Musiques Suisses, Neos, Col Legno, Tree in a Field and Wergo document their work.
The ensemble curates its own series of concerts in Switzerland and performs regularly at international venues and festivals such as Wien Modern, Close Encounters, Music Olomouc and reMusik. In 2013 the Mondrian Ensemble was awarded a working year scholarship by the City of Zurich, and in 2015 the ensemble was admitted to the partnership program of the Fondation Nestlé pour l’Art.

Registered since about 3 years
Last login on 3 March 2022