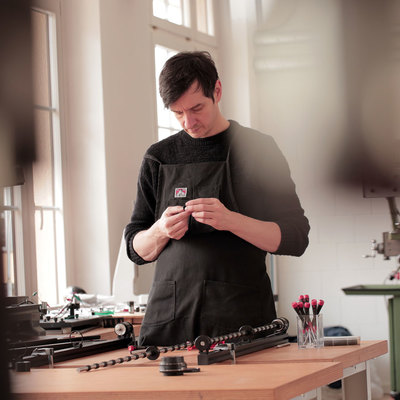 Born in Sursee in 1974, Swiss artist Pe Lang has a background in electronics, computer programming and experimental music. Emphasizing the role of the observer and inviting us to rethink the notion of technology, Lang consistently challenges the idea of a fixed, immutable reality by exploring the boundaries of possibilities. Like algorithms that crash in the presence of a misplaced semicolon, his kinetic installations are minimal yet sophisticated systems that depend on the precise combination of parameters in which each and every detail participates in creating the captivating interplay between rationality and illusion.

Lang's work have been represented in exhibitions and installations for more then a decade. After completing his certificate in electrical skills in 1994, he began creating experimental mechanical sound objects presenting them in the form of live performances / installations at various European and North America art spaces and festivals, including the Transmediale in Berlin, ISEA Singapore/Hongkong, sonicActs Amsterdam or the Elektra Festival in Montreal. From 2005 to 2008, these sound objects where exhibited as part of a collaborative project under the title "Untitled Sound Objects. In 2007, Lang received a one year artist-in-Lab research residency fellowship at the Swiss Center for Electronics and Microtechnology CSEM. Lang was twice honored with the prestigious swiss art award (2009 and 2010). Among other awards, Lang received themediaprojects award in 2005, 2008 and 2011 from the Swiss Federal Department of Culture.

He has received commissions by Swiss Science Center Technorama, the Villa Empain - Boghossian Foundation in Brussels and the Exploratorium in San Francisco as well as his works can be found in private, museum and foundation collections such as the EMMA - Espoo Museum of Modern Art, the Borusan Contemporary in Istanbul, the Museum of Science, Art and Human Perception in San Francisco, the Maxine and Stuart Frankel Foundation for Art in Mischigan, and the Artphilein Foundation in Liechtenstein. Exhibitions of Lang's work include the Centro de Arte Santa Museum Mónica, Barcelona; Kunsthalle Bern; växjö art hall, Sweden; The Leonardo, Utah Museum Science and Technology Arts Museum; HeK Haus der elektronischen Künste Basel; Martin- Gropius-Bau, Berlin; Ashmolean Museum, Oxford; Art Plus Museum, Donaueschingen; Museum Haus Konstruktiv, Zurich; the InterCommunication Center [ICC], Tokyo.