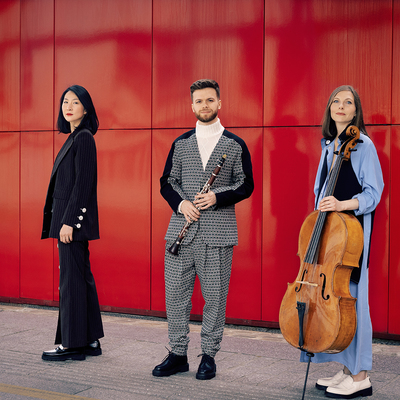 Boglárka Pecze (clarinet), Eva Boesch (cello) and Sun-Young Nam (piano) met during scholarships at the International Ensemble Modern Academy in Frankfurt, after which they formed Trio Catch, named after “Catch” by Thomas Adès, in which the clarinet is “caught” by a piano trio that plays a charming children’s round. Alongside performing classical music, the interpretation of contemporary music is one of the main focuses of the three young musicians.

The trio have worked with numerous composers throughout the nine years of their collaboration, including Mark Andre, Georges Aperghis, Beat Furrer and Helmut Lachenmann, with whom they are also connected through various CD productions and radio recording projects. Trio Catch’s debut CD “in between” was released in 2014 on the col legno label, followed by the release of their second CD “Sanh” in 2016. Their new disc „As if“, released on Bastille Musique, was awarded the German Record Critics’ Award (Preis der deutschen Schallplattenkritik).

The trio won the Hermann and Milena Ebel prize in 2012, the Berenberg Kulturprize in 2014 and was awarded with the Dwight and Ursula Mamlok Prize in 2018.

A busy schedule has already seen Trio Catch playing concerts in South America, Asia and Europe, in venues such as the Cologne Philharmonic, Elbphilharmonie Hamburg, Philharmonie du Luxembourg, the Pierre Boulez Hall in Berlin as well as at festivals such as Ultraschall Berlin, Musica Strasbourg, Festival d'Automne à Paris, Heidelberger Frühling, International Summer Course for New Music Darmstadt, Klangspuren Schwaz and the Wittener Tage für neue Kammermusik. During the 2015/16 season Trio Catch performed at some of the greatest concert halls in Europe as part of the European Concert Halls Organisation’s “Rising Stars” series.

The trio are also involved in music education. From 2014 until 2018 they hold a teaching post at the Musikhochschule Hamburg, where they run workshops for students of composition as the ensemble in residence. They also taught the children’s composition workshop “Louder” at Klangspuren Schwaz. In 2016, Trio Catch initiated “Ohrknacker”, their own series of workshop concerts. Each concert presents a selected piece of contemporary music, written especially for the trio.

Registered since about 3 years
Last login on 27 June 2022