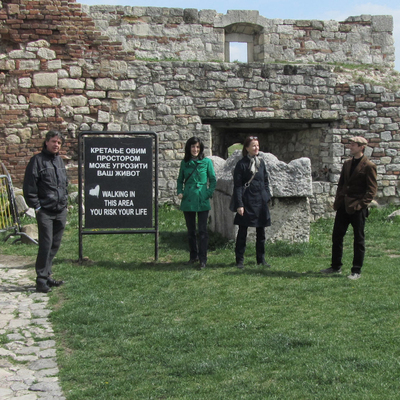 experimental electron..., Bern – The GingerEnsemble, founded 2010 grew out of the Department of Music and Media Arts at the Bern University of the Arts, dedicates itself to... Read Biography

The GingerEnsemble, founded 2010 grew out of the Department of Music and Media Arts at the Bern University of the Arts, dedicates itself to experimental music with a kind of “historical performance practice” and places itself in the tradition of the “composer/performer” as exemplified by the legendary “Sonic Arts Union” with Robert Ashley, David Behrman, Alvin Lucier and Gordon Mumma – a collective of experimental musicians that was active between 1966 - 1976.
The repertory of the GingerEnsemble includes pieces by David Behrman, John Cage, Tom Johnson, Takehisa Kosugi, Alvin Lucier, Steve Reich and Robert Watts. So as not to lean too heavily on the “historical”, however, exciting original compositions and performances by the members of the ensemble will also be presented. By means of algorithmic composition, electro-acoustic music, and the experimental use of new media, aspects of perception will be investigated. Non-hierarchical composition may also refer to the radical paradigmatic shift that occurs in experimental, process-oriented music between an audience and author, but also between the recipient and participant.
With the program non-hierarchical compositions, the artists of the GingerEnsemble create a bridge between French poststructuralist philosophy and experimental avant-garde music from the USA: All of the “historical” compositions were created around the year 1974 – the year in which one of the most famous prologues was written: “Rhizome” by Gilles Deleuze and Félix Guattari.

The GingerEnsemble founded on the occasion of the InstallAction “Monument GingerSociety Thun” appears 2010 for the first time in concert - and as a prelude to the InstallAction - with a program of non-hierarchical compositions. The monument – a colossal papiermaché ginger which stands as a metaphor for rhizomatic scientific models – provides the template, spatially and thematically, for the program of “non-hierarchical compositions”. And so, with an open mind and great enthusiasm, the GingerEnsemble enters a field of contradictions. A program of non-hierarchical compositions is a noble aspiration for an essentially utopian undertaking. As a rule, clear hierarchies apply in music, whereby the hierarchical sequence of composer-interpreter-listener can certainly also mutate unpredictably.
Since the unraveling of aesthetic conventions at the beginning of the 20th Century and as a result of art movements that arose from it such as futurism, Dadaism and experimental music, artists in the early 1960s came together to create a performance art that understood itself as a process-oriented, “flowing” sound event: fluxus! In the interplay between music, theater and the visual arts, the boundaries between the arts were to be lifted. While authorship continued to play a role, artists resisted any efforts at being co-opted and even copyrights were declared ineffectual and inadequate. One characteristic that unites the works of fluxus artists is an anarchic humor: “Anyone who believes fluxus to be something serious is mistaken. But anyone who maintains that fluxus is something that is not serious is likewise mistaken. The uniqueness of fluxus is that it also does not lie in between… Fluxus is everywhere at the same time. Its secret is: it does not exist at all, but it exists.” (Al Hansen)