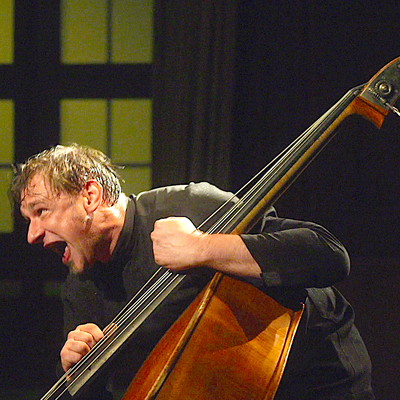 Aleksander Gabryś - composer, double bass soloist, video-artist, 1998 graduated with distinction the Karol Szymanowski Academy of Music in Katowice. He started composition studies under the guidance of his father, Ryszard Gabryś. Next, he continued under Thomas Kessler at Musik- Akademie der Stadt Basel, where he also obtained a Soloist’s Diploma under Ovidiu Badila and Wolfgang Güttler in 2001. He received scholarships from the Instytut Sztuki [Art Institute] in Cracow, Lyra Foundation in Zurich, Thyll-Dürr Foundation in Basel, Młoda Polska [Young Poland] Foundation in Warsaw (2009), and the 45th Internationale Ferienkurse für Neue Musik in Darmstadt (2010). In 1998 he got a scholarship in Künstlerhaus-Schloss Wiepersdorf funded by the government of Brandenburg and in 2002 he received scholarships from the Siemens Foundation and Foundation of Friends of the Warsaw Autumn Festival. He won the 1st prize twice in The A. Krzanowski Composers’ Competition in Bielsko-Biała (1990 and 1992); in 1993 he was the winner in the `Patri Patriae` Competition for a work dedicated to John Paul II. He was also a prize-winner in the following competitions: 25. Concours International de Musique Electroacoustique in Bourges (1998), The 1st A. Panufnik Composers’ Competition in Cracow (1999) and The 43rd T. Baird Young Composers’ Competition in Warsaw (2000). His works have been performed at the Silesian Composers’ Tribunes, Jour Fixe IGNM in Basel, Silesian Days of Contemporary Music, Warsaw Autumn, Unerhörte Musik in Berlin, Forsterbrücke in Germany, Hudobne Salony in Banska Bystrica, Synthese 2003 in Bourges, International Days of the Cracow Composers, Musica Polonica Nova in Wrocław, Legnica Organ Conversatorium, Ars Cameralis Silesiae Superioris, as well as dozens of recitals in Poland, Switzerland, Germany, Spain, The Netherlands, France, Italy, Serbia, Bosnia Herzegovina and other countries. As a performer, Gabrys specialises in contemporary music, performed numerous new compositions for double bass, many works have been dedicated to him, e.g. Concerto for Double Bass and Orchestra by Piotr Radko or Concerto-Fantasia by Edward Bogusławski and also solos by Jevgenij Irsai, Ryszard Klisowski, Thomas Kessler, Ryszard Gabryś, Krzysztof Knittel, Junghae Lee, Michel Roth, Thomas Wally, Nicolas Tzortzis, Aram Hovhanissyan, Emre Sihan Kaleli and Zbigniew Karkowski. He was the soloist in several compositions with double symphonic and baroque orchestra by Helmut Oehring, i.e. “Angelus Novus III”, “Gunten”, “AscheMond oder The Fairy Queen” or “DunkelHERZ / Orfeo17”. He won awards in The A. B. Ciechanski String Performance Competition in Poznan (1997) and the 2nd K. Penderecki International Chamber Music Competition in Cracow (1998). He has performed as a soloist with the Silesian Philharmonic, Basel-Sinfonieorchester, NOSPR, Kammerakademie Potsdam, Wuppertaler Sinfonieorchester, Philharmonic Orchestra in Freiburg, a.o.; in addition, he has performed solos for double bass during the Warsaw Autumn and other festivals such as Melos-Ethos in Bratislava, Hudobne Salony in Banska Bystrica, Warszawskie Spotkania Muzyczne [Warsaw Music Meetings], Dni Karola Szymanowskiego [The Karol Szymanowski Days] in Zakopane, Das Theatralische in der Musik in Davos, Expo 2002 in Switzerland or Festival “Angelica” in Bologna. He is a member of Ensemble Phoenix Basel, X-Quartett in Basel, pre-art soloists in Zürich Freagroup Studio. He also works with Collegium Novum Zürich, Klangforum Wien, Ensemble Modern in Frankfurt and oenm - Österreichisches Ensemble für Neue Musik in Salzburg, with which he has performed at festivals in Paris, Madrid, Venice, Rome, Lisbon, Porto, Buenos Aires, Johannesburg, Ljubljana, Yerevan, Tbilisi, Sao Paulo and Montevideo.

As a composer, he is interested in various kinds of chamber music, electronic music, instrumental theatre and improvisation in the context of multimedia activity. His lively literary imagination has driven him towards searching for inspiration in the canons of European and world literature. He experiments with the idea of permeation of arts: he introduces elements of acting, dance, film, poetry, props, lighting, and spatial effects to his compositions. By doing so, he aims to augment the expressivity of the artistic message and provide the message with various layers of meaning that would be easily recognised by the recipient. He uses a wide range of sound material, inter alia, sounds with natural provenance, electronically generated, or by means of preparation of traditional instruments. He uses intertextuality (quotations, collages) beside some classic 20th-century techniques. His music is characterised by dense concentration of expressivity, which comes through particularly effectively in his solo performances realised in the convention of one actor’s theatre. In 2010 he recorded an album of Polish and Western European contemporary compositions for solo double bass and with orchestra, released by DUX Records.

Registered since about 3 years
Last login on 25 April 2022