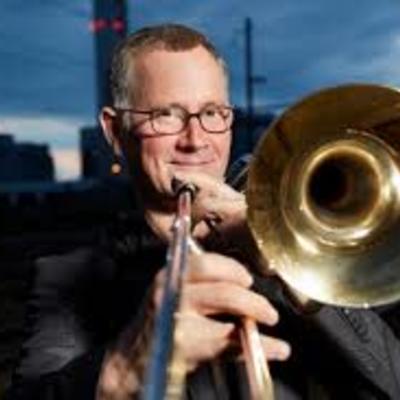 Chamber Music, Solo, ..., Basel-Stadt – The trombonist and composer Mike Svoboda was born 1960 on the island of Guam, grew up in Chicago and came to Germany with the help of a BMI Award... Read Biography

The trombonist and composer Mike Svoboda was born 1960 on the island of Guam, grew up in Chicago and came to Germany with the help of a BMI Award to Young Composers in 1982. His eleven years as trombonist and assistant with Karlheinz Stockhausen during the 80s and 90s proved to be of eminent importance for Svoboda's musical development. Including the collaboration with Stockhausen and other composers such as Peter Eötvös, Helmut Lachenmann, Wolfgang Rihm, Martin Smolka, David Lang, and Frank Zappa, Svoboda has premiered over 400 works for trombone at major festivals throughout the world.
Mike Svoboda returned to composition only after ending his work with Stockhausen and has since received commissions, mostly for works spanning an entire concert, from festivals and opera houses such as the ECLAT festival Stuttgart, The State Opera Hannover, The National Theater Mannheim and the State Opera in Stuttgart. Major festivals have invited him to be artist or composer-in-residence. Often involved in his works as a soloist or with his own Mike Svoboda Ensemble, he composes across the borders between popular and classical music, high culture and entertainment, combining - through the use of text and various musical styles - both traditional and avant-garde. Some of his recent works are: 14 attempts to love Richard Wagner (2002) for four musicians, Love Hurts - Carmen Remix (2003) for trombone and orchestra, Clara, Robert, and Johannes - a fantasy on a romantic triangle (2004) for 18 musicians, turntables, and a narrating trombonist, ALIAS - Mozart aka Rossini (2005) for trombone and string orchestra, The Phonometroph Erik Satie (2006) for voice (barrel organ), accordion, and trombone, Studies to "Adorno (sex, drugs, and new music)" (2007) for vocal soloist, two ensembles and video. For several years now he has been working together with the playwright and stage director Manfred Weiss, who wrote the libretto to Svoboda's chamber opera The incredible Sptoz (2007). The opera Erwin, the natural talent (2005/2007), which was premiered to great acclaim in Stuttgart in 2005 and had a second premiere in an extended version in Bielefeld in January 2008, is another example of this productive collaboration. Numerous CDs, mainly for the WERGO label, document Svoboda's art both as an interpreter and composer. In 2008 he was awarded the Praetorius-Prize for Innovation in Music from the[nbsp]German government, because of, according to the jury, the "influence and recognition his concepts and ideas have had on the development of music and its performance". Since 2007 he is professor for contemporary chamber music and trombone at the University of Music in Basel, Switzerland.