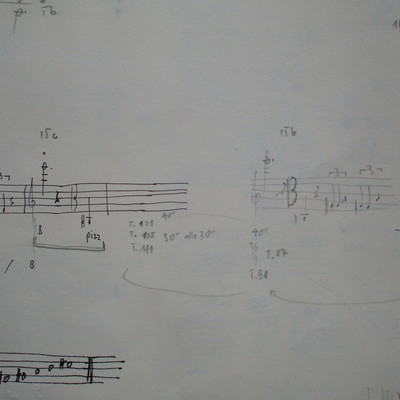 Composition, Chamber music, Aargau – Jürg Frey was born in Aarau in 1953. After finishing his studies at the Conservatoire de Musique de Genève, he began a career as a clarinetist.... Read Biography

Jürg Frey was born in Aarau in 1953. After finishing his studies at the Conservatoire de Musique de Genève, he began a career as a clarinetist.
Until the age of 40, his work as composer remained mostly private, behind his activities as a clarinetist, family man, festival organizer and clarinet teacher for children.
In the early 1990’s he became a member of the wandelweiser composer collective, an experience of inspiration, challenge and long lasting friendships.

In this time also begins his international activities. He developed his own language as a composer and sound artist with the creation of wide, quiet sound spaces. His work is marked by an elementary non-extravagence of sound, a sensibility for the qualities of the material, and precision of compositional approach. Sometimes his compositions bypass instrumentation and duration altogether and touch on aspects of sound art. He has worked with compositional series, as well as with language and text.
He has particularly often been the guest of small, creative concert organizers such as Klangraum Düsseldorf, music we’ d like to hear (London), Ny Musik Boras (Sweden), The Dog Star Orchestra (Los Angeles), heim.art Neufelden (Austria) The Miniaturist Ensemble (New York), Klang im Turm (Munich), a.pe.ri.od.ic (Chicago), Louth Contemporary Music Society (Ireland),the wulf (Los Angeles), and Ordinary Affects (Boston).

Registered since over 2 years
Last login on 30 November 2020