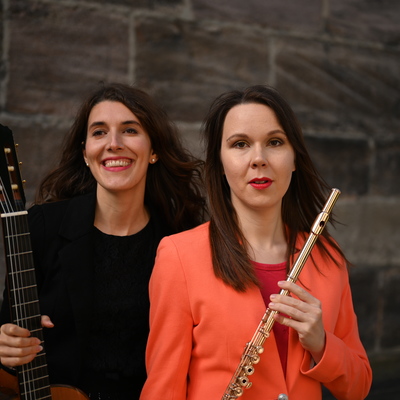 Musicians Evgeniya Spalinger (flute) and Marisa Minder (guitar) have enjoyed many years of intensive concert activities as a chamber music duo.
Founded in 2015, Duo Diversitas was predestined for success: they won the 1st prize at the International Competition for Chamber Music with Guitar in Bale Valle, Croatia, in 2016 followed by the 1st prize at the In-ternational Competition Danubia Talents in Vac, Hungary, in 2017. Since then, they have been giving concerts all over Europe playing clas-sical and contemporary concert repertoire, including for the concert se-ries Neue Kammermusik in Fulda and Roter Salon in Vienna. Recordings for SRF2 Radio Station and numerous premier performances of the works by composers as Maxim Seloujanov, Max E. Keller and Art Oliver Simon clearly demonstrate the high artistic potential of Duo Diversitas.
The CD debut EX AEQUO represents another important milestone in their career. Equal distribution of voices in the arrangements and the original works is of special importance to the musicians and the musical work of the duo: this allows the flutist and the guitarist to set important impulses and to inspire each other.
The name Diversitas (from Latin “difference, contrast, variety”) reflects both the diversity of the repertoire (from Baroque and Romantic music, arrangements of well-known pieces and to the latest works composed for the duo) and the richness of sound that can only be achieved through virtuoso playing of these two instruments. Diversitas also refers to the two artists, the flutist from Russia and the guitarist from Switzer-land, who complement each other perfectly in their differences.