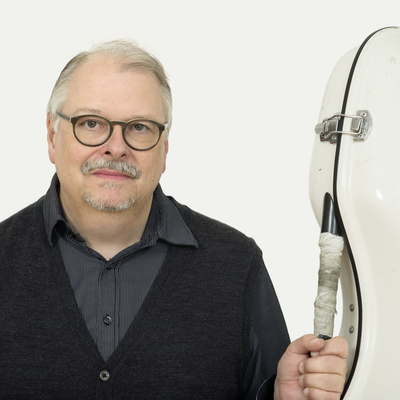 Composer-Improviser, Zürich – Alfred Zimmerlin Born in 1955, studied musicology and ethnomusicology at the University of Zurich and composition with Hans Wüthrich and Hans... Read Biography

Born in 1955, studied musicology and ethnomusicology at the University of Zurich and composition with Hans Wüthrich and Hans Ulrich Lehmann. Zimmerlin works as an improvising musician and cellist. In a lively concert activity he performs with numerous formations in Europe and the USA, also at the most important festivals. He is a member of the trio Kimmig-Studer-Zimmerlin, the electro band Zimmerlin-Stoffner-Meier, and for 35 years he was a member of KARL ein KARL, a composers' collective and improvisation trio (with Peter K Frey and Michel Seigner), which worked together from 1983 to 2018 (death of Michel Seigner) in an unchanged line-up. The special feature of the collective was that all compositional decisions were taken and answered for together. Zimmerlin's works with KARL ein KARL and as an improvising musician are documented on numerous sound recordings.

On the other hand Zimmerlin works as a composer. His list of works is extensive, including piano pieces, chamber music with or without live electronics, vocal music, orchestral music, music theatre, but also works for radio and film. His latest major works include "On the Move - in a Roundabout Way" for electric bass and string orchestra, "Gezeiten der Zeit" (string orchestra), "Cueillis par la mémoire des voûtes" (saxophone quartet and string orchestra), the chamber operas "Euridice singt", "Ana Andromeda" and "More than eleven", four string quartets or the chamber music cycle of the "Nachtstundenstücke".

Zimmerlin's works have received numerous awards, including the music prize of the C. F. Meyer Foundation, year's grants of the Aargauischen Kuratorium and the City of Zurich, and in 2001, at the invitation of Pro Helvetia, a residence in Cairo. In 2005 he received the prize of the UBS Kulturstiftung, in 2014 the cultural prize of the Canton of Zurich and the Zolliker Kunstpreis, and in 2016 he was nominated for the Swiss Music Prize. Since 2010 he has been Professor of Free Improvisation at the Musikakademie Basel, FHNW University of Music/Sonic Space Basel.

Registered since over 3 years
Last login on 17 November 2021