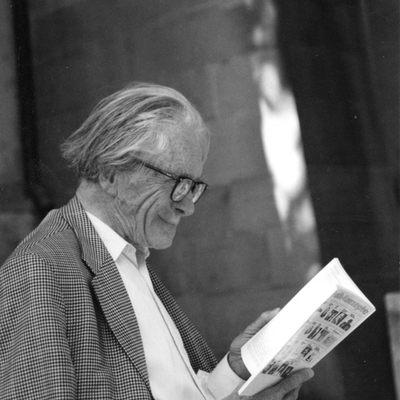 Meinrad Schütter was born on September 21st, 1910 in Chur in the Canton of Graubünden, surrounded by three cultures: German, Romantsch and Italian. His mother sang and her wide repertoire already included songs by Othmar Schoeck, who became the child's first important influence. Later, the youngster would come under the spell of Arthur Honegger's and Igor Stravinsky's expressive music.

As a schoolboy Schütter had piano and organ lessons as well as theoretical instruction with Antoine Cherbuliez. After studies at the Zurich Conservatoire, Schütter travelled in Switzerland and abroad as an accompanist, received a small Rome scholarship in 1939, and studied by correspondence with Willy Burkhard during the war and with Paul Hindemith at Zurich University from 1950 to 1954. He earned his living at the Zurich Opera as ballet repetiteur and director of lighting, at the same time being active as a composer. Since 1976 he has lived as a freelance composer in Küsnacht (Canton of Zurich).

Meinrad Schütter was mainly autodidact. His music is characterized by transparency and density; he is concerned with tonal colour and chordal analysis. Still influenced in the «thirties» by Expressionism and «Neue Sachlichkeit», he soon created his own style, the «Fragmentary Composition», short segments containing quotations and collages. Concise rhythms, expressiveness, dance elements and a bent to humour and irony create a particularly personal style. Schütter works with free tonalities, nevertheless relating to all kinds of tonal progressions.

He wrote choral music, two masses, the opera «Medea», ballet music, orchestral works (one symphony a.o.), songs with instrumental accompaniment, 58 songs with piano, piano music, chamber music and one piano concerto. In his songs we can recognize the width of his stylistic development, ranging from the traditions of Hindemith and Schoeck to the «Second Viennese School». His vocal church music ranges in scope from the Gregorian melodic style to polyphony using free tonality.

In his youth Schütter was considered an extreme modernist (A. Cherbuliez, 1938), but his path was never revolutionary; he preferred a progressive development. In his later works he achieves a new lightness and intensity of colour, expression and movement.

Registered since over 3 years
Last login on 6 July 2019