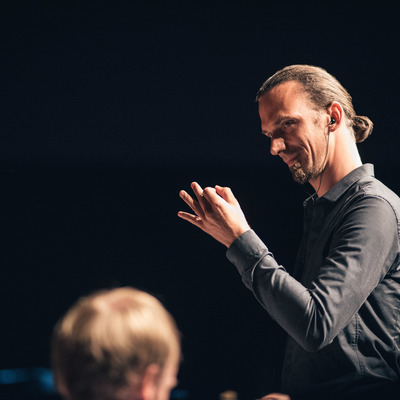 Composition, Vocal music, Bern – Lennart Dohms, conductor, is born in Bonn. After studying theology and theatre in Cologne, he completed his musical education at the Mozarteum... Read Biography

Lennart Dohms, conductor, is born in Bonn. After studying theology and theatre in Cologne, he completed his musical education at the Mozarteum Salzburg, the Conservatoire superieur de Paris and the Hochschule für Musik Dresden, where he graduated with distinction. Transdisciplinary performance work as well as research that combines questions of contextualizing music and the politics of building communities is a driving force for his work within and outside of institutions.
He has conducted orchestras and ensembles throughout Europe and has premiered over 200 new pieces ranging from chamber music to large-scale opera productions. Recently he has enjoyed working regularly with the Nouvel Ensemble Contemporain in La-Chaux-de-Fonds and the Ensemble Mosaik in Berlin. Next to his professorship at the Bern University of the Arts he is continuing to guest teach in cities such as Frankfurt, Oslo, York, Danzig and Salzburg.
As a founding member of the ensemble El Perro Andaluz he was awarded the Dresden Culture Prize and, for his work as conductor, the Arras-Prize for artistic work and a fellowship from the Akademie Musiktheater heute. The latter invited him to join its jury as did the Berlin Academy of the Arts in 2017. In 2018 Lennart was appointed a member of the Saxonian Academy of the Arts.
In 2013 he was appointed to teach at Bern University of the Arts as head of the Master of Arts degree course in Performance.