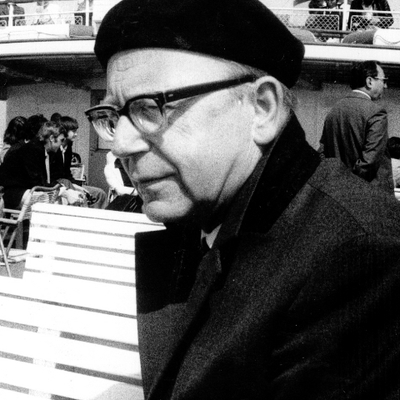 Elektronische Musik, ..., Solothurn – As a composer, Hermann Meier can in no wise be regarded as representative of his own generation, but is rather to be classed with those composers... Read Biography

As a composer, Hermann Meier can in no wise be regarded as representative of his own generation, but is rather to be classed with those composers who were some twenty years younger (such as Boulez and Stockhausen). Meier uniquely turned away from the compositional methods and fashions of his contemporaries, to participate instead – albeit unrecognised – in the renewal of European art music. He is thus by far the oldest representative of the post-War avant-garde. He early on explored serial and pointillist techniques, and from 1949 onwards worked on a serial theory of his own. Already in the 1950s he was composing his first cluster works, and in the 1970s turned to noise composition and electronic music. Over several decades in the seclusion of his home in the Schwarzbubenland region of Switzerland, he produced an oeuvre that is quite staggeringly innovative and without parallel. It includes a large collection of graphic process diagrams that Meier used from 1955 onwards to visualise and concretise his musical compositions.

Despite the quality of his oeuvre, and despite isolated endeavours to get it better known, Meier’s music remained unheard for a long time. By the time he reached his 70th year, Hermann Meier had experienced just three performances of his music. It was only from the mid-1980s onwards that his works began to emerge out of the shadows. In this regard, particular credit must go to Urs Peter Schneider and his Ensemble Neue Horizonte Bern, and the pianist Dominik Blum, a former student of Schneider’s. Blum recorded the first CD to feature piano works by Meier, which was released during the composer’s lifetime. However, it was only in 2010 that the basel sinfonietta first performed two of his 27 (!) pieces for orchestra.
In 2009, Meier’s archives were acquired by the Paul Sacher Foundation, and this fact has played a crucial role in getting greater recognition for Meier’s oeuvre. Since then, further works have been performed on a regular basis, the highpoint up to now being the world première of his Piece for Large Orchestra and Piano, HMV 62, at the 2018 Donaueschingen Music Days. Meier has also increasingly become the focus of musicological attention. In 2017, the richly illustrated book Mondrian-Musik was published by Chronos Verlag in Zurich, which is an initial effort to document Meier’s oeuvre. It features twelve chapters devoted to his works and their context, along with a time chart, a work catalogue and an inventory of his archives.

aart verlag has set itself the objective of publishing Hermann Meier’s complete works in facsimile, thereby enabling the music world to gain access to one of the most astonishing musical visionaries of the 20th century.

RECEPTION
"The composer Hermann Meier (1906–2002) belongs to the same generation as Olivier Messiaen, is thus some twenty years older than Karlheinz Stockhausen, Karel Goeyvaerts, Pierre Boulez and Jean Barraqué, and in the 1950s and ’60s he wrote a music that, looking back today, we must regard as worthy of mention alongside those four composers."
(Alfred Zimmerlin, NZZ 27.5.2000)

" 'Dodecaphonist, serialist, avant-gardist' – this pithy characterisation of Meier by the pianist Dominik Blum from Winterthur also implicitly sums up the fundamental reasons for Meier’s life-long outsider status and his isolation on the Swiss music scene. Meier was born in Selzach in 1906, grew up in Solothurn, and later worked full-time as a teacher at the village primary school of Zullwil in the canton of Solothurn. He felt drawn to new composing techniques at a time when they were still regarded with horror by the majority of Swiss composers and were an object of protest."
(Doris Lanz: Neue Musik in alten Mauern, Die 'Gattiker-Hausabende für zeitgenössische Musik' – Eine Berner Konzertgeschichte 1940–1967, Bern: Peter Lang, 2006, p. 99.)

"It is in any case highly gratifying that interested researchers can now get a picture of a composer who is as distinguished as he is unknown. This is pioneering work, and not just in support of Swiss music history! Because Meier’s significance is far greater than that."
(Torsten Möller, Schweizer Musikzeitung, January 2010)

"The Swiss composer Hermann Meier created an oeuvre that is without parallel – and did so in secret, though involuntarily. He was discovered in the late 1970s, initially by the composer Urs Peter Schneider. Before this, Meier had experienced hardly any performances, for his works were too unmanageable for the Swiss music scene of the day. This humiliation probably made him all the more implacable. Meier composed agglomerations of sound, tone clusters, noise-like chords and powerful rhythms. It’s grandiose music."
(Alfred Zimmerlin, NZZ 28.1.2010)

"The older work [HMV 75] possesses an almost archaic power. Its rigid “wall of sound” lasts for almost half an hour, into which the pianos hammer their harsh chords in well-nigh manic fashion. This is a music whose forbidding rigidity is both alienating and fascinating – a music without any melodic content, without any hint of tenderness or ease."
(Roland Wächter, Dissonance No. 131, September 2015)

Registered since over 2 years
Last login on 9 November 2019