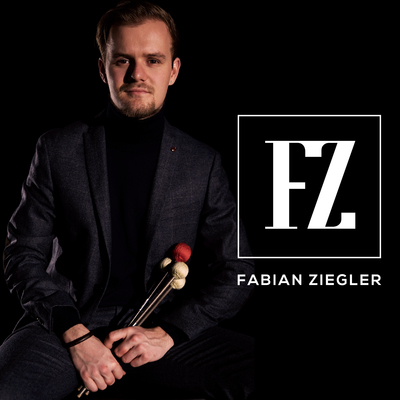 Recently distinguished as “young artist” at the renowned Davos Festival, Mr. Ziegler impressed both audiences and press with works by artists spanning from Iannis Xenakis to Astor Piazolla. He also provided the shimmering crystalline vibraphone sound in “überbach” by Arash Safaian alongside pianist Sebastian Knauer and the Zürich Chamber Orchestra for the cross genre project “Digital Symphony” at the famous Prinzregententheater in Munich. Mr. Ziegler has also appeared in other important venues such as the Konzerthaus Berlin, KKL Lucerne, Kulturcasino Bern, the Tonhalle in St. Gallen, and at Lincoln Center in New York. In 2017, he also performed with Martin Grubinger’s Percussive Planet Ensemble.
Fabian Ziegler fascinates audiences with his varied and imaginative programming, carrying with him a multitude of instruments capable of creating widely diverse sound worlds. His repertoire ranges from Bach to Cage to Xenakis and beyond. He frequently takes part in world premieres by renowned composers, including Christos Hatzis “Tongues of Fire” (percussion concerto) in 2017 and Emmanuel Séjourné’s Double Concerto for Vibraphone, Marimba and Wind Orchestra in 2016.
Mr. Ziegler is committed to expanding the repertoire, including new percussion works by the composers John Psathas, Avner Dorman, Arkadiusz Katny, among others. He not only performs frequently as a percussion soloist, but he also founded his own concert series called “Marimba Recital Concerts.” Since September 2015, Mr. Ziegler has welcomed international guests from the world of percussion. In 2018, the “Swiss Percussion Night” concert format was added. Inquisitive and open minded, he has no inhibitions or reservations. This applies not only to the repertoire he cultivates and conquers, but also to concert formats.
A native of Switzerland, Fabian Ziegler completed his Bachelor of Arts in Music at Zürich University of the Arts under the tutelage of Martin Grubinger, Prof. Klaus Schwärzler, Prof. Raphael Christen, Prof. Rainer Seegers and others. Also in Zürich, he completed a Master of Arts in Music (Performance Soloist) in September, 2017. Along with his regular studies, he has also taken part in international masterclasses with Katarzyna Mycka, Jean Geoffroy, Svet Stoyanov, Conrado Moya, and Beverly Johnston.
In December of 2017, Mr. Ziegler won the Migros Kulturprozent study prize for the second time since 2015 for his extraordinary solo performance during the Instrumental Music Competition. Since 2017 he has also held Friedl-Wald Foundation and Rahn Kulturfonds scholarships.