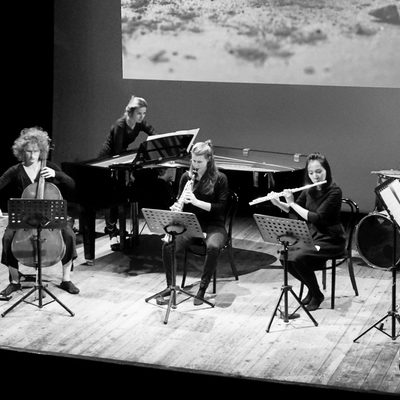 contemporary, Vaud – Ensemble Sargo, based in Lausanne, is a collective devoted to the promotion and creation of new music, and strives to develop programs, concerts... Read Biography

Ensemble Sargo, based in Lausanne, is a collective devoted to the promotion and creation of new music, and strives to develop programs, concerts and multidisciplinary projects with unrestrained and fresh ideas, but as well to promote young artists and to gain wider audience for contemporary music.

From the beginning to nowadays, a great number of pieces by some of the most important composers have been programmed on the ensemble’s season concerts (Witold Lutosławski, George Crumb, Krzysztof Penderecki, Tōru Takemitsu, Georges Aperghis, Beat Furrer, Mauricio Kagel, etc.). And some of them were worked in collaboration with the authors, like: Dieter Ammann, Lucian Meţianu, Victor Alexandru Colţea, Jean-Luc Darbellay, William Blank, etc.

The ensemble was founded in the year 2012, and since then, it has participated in different contemporary music festivals in Switzerland. Starting 2014, the Ensemble has been invited as Ensemble in Residence at the Hochschule für Musik Luzern to work with young composers and to perform their creations, in collaborations with Dieter Ammann and Andreas Brenner.

During all of these years from its beginning, Sargo has had the opportunity to perform in different important music halls such l’Opéra de Lausanne, Salle Davel in Cully, Théâtre Pavillon and Neubad in Lucerne, St Francois Church in Lausanne, etc.