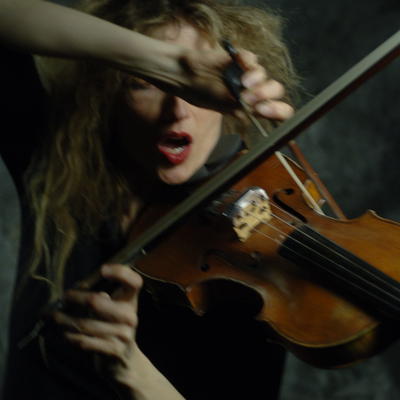 Charlotte Hug, Swiss born intermedia artist, composer, improviser and musician of the extreme. Her innovative musical-visual solo performances in distinctive locations and her interdisciplinary work have created an international furore. Hug is constantly breaking new ground with her instrument and has reinvented the viola.

Her speciality is also a blend of viola and vocals using high falsetto, vibrating glottal sounds, multiphonics and language like articulation. Hug seeks to develop instrumental and vocal techniques to their fullest extent, which has resulted in an unmistakable and unique tonal language.

Having completed her studies in fine arts and classical music, she won divers awards such as “artist residences” in London, Paris, Berlin, Johannesburg, Shanghai, the international fellowship at the Civitella Ranieri Foundation and she was “artiste étoile” (star artist) at the world-renowned Lucerne Festival.
She has recorded an extensive discography including three solo CDs on important labels like Emanem, Unit, Leo Records.

At the heart of Hug’s work are the “Son-Icons”, Visual Sounds, with which she has created a new genre of transdisciplinary, often staged spatial music and art.
With her installations and spatial- and video-scores consisting of Son-Icons she creates intermedial compositions often for inter-disciplinary and cross-cultural artistic collaborations. Alongside exhibitions in a range of settings from Off-Spaces to museums, she pursues an active program of concerts as a soloist, composer and conductor of her own intermedial works, as well as performing improvisations at top festivals in Europe, South Africa, North and South America, Canada and China.

Hug gives international masterclasses at Universities of music and art. She is a lecturer and head of the postgraduate studies which she herself founded «Creation & Scenario in Music» at the Zurich University of the Arts.

“Charlotte Hug, a viola-player who applied much the same vigorously energy to the fiddle that Ornette Coleman once did” Q MAGAZINE

"by reinterpreting her own drawings «Son-Icons» made on site – with extraordinary results . so far the sonic potential of the viola has remained unexplored. Not any more.” DAN WARBURTON – PARISTRANSATLANTIC

"As her passion for the human interaction with her instrument developed, she began to meld her unique vocalistics into her artful reinvention of the viola and her music. Hug's brave adventure in which Charlotte Hug reigns supreme. It is here that her world of music awakens the spirits dancing in the flesh." RAUL D'GAMA ROSE - ALLABOUTJAZZ

“Charlotte Hug is a talented and innovative composer, who has exceptional musical language and original playing technique. Her music is exceptional in many way and aspects but the most, the marvelous ability to base the music on main basics of classical music and modifie the sound in shocking, organic and surprising way.” AVANTSCENA WORDPRESS 2019

“Many of Miss Hug’s compositions – and she has contributed to a vast and dazzling panoply of work from vocal pieces, to works for viola (her other instrument), orchestra; even work in the realm of visual art – (each) possess the massive, rough-hewn quality of a prehistoric or timeless monument, though as her career has progressed she has also shown an increasing ability to tease out of the sound world music of spare lyrical beauty and, on occasion, haunting delicacy”. RRAOUL DA GAMMA- JAZZDAGAMMA

Registered since over 3 years
Last login on 6 December 2019