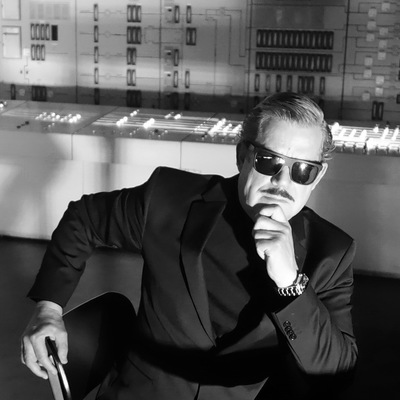 Interdisciplinary, Multimedia, Zürich – As a young boy, I was fascinated by the mysterious echoes of the mountains. I shouted till I was hoarse against those giant rockwalls and waited... Read Biography

As a young boy, I was fascinated by the mysterious echoes of the mountains. I shouted till I was hoarse against those giant rockwalls
and waited for the sounds to bounce back. It was an education in time and space. During my childhood, I felt an affinity with the natural sounds and noises you hear every day.
I started to collect sounds and built a huge archive of unusual noises on magnetic tape. I’d cut together sections of tape, each the same length, and arrange them in various ways and play it back as a whole loop.
This operation takes hours, sometimes days but often the results are a complete surprise. Somehow this was my first sampler and sequencer based on analog technology. It was also the early days of creating music in Yello.

I was surrounded by music that inspired me. I listened to Count Basie, Duke Ellington, Miles Davis, and one of my favourites, Sun Ra. At the same time, I loved the melancholy of Astrud Gilberto, the slow-burn of Sinatra, Tito Puente and Elvis and the rich background of the 70s : The Stooges, Cream, Pink Floyd, The Doors, James Brown, Led Zep, Hendrix, Zappa, Spike Jones. Two particular favourites are Eric Burton & War ’Tobacco Road’ and The Normal ’Warm Leatherette’.
I was always fascinated by the use of electronic instruments : György Ligeti, Peter Scherer, Terry Riley and Raymond Scott are personal favourites but the artist who really motivated me was Herbie Hancock. I went out and bought an ARP Odyssey after I heard “Sextant“. I couldn’t read the English manual so I just started experimenting using the magic combination of hand-to-eye. To this day, I’ve never read a synth manual.
To build a new track, I start preparing the colours and choose the right brush-tool, I open up one of the thousands of folders on my computer, full of secrets and self-prepared fragments of moods and patterns. I have a photographic memory, I remember all of the names and contents in each folder, like a squirrel who collects and hides hundreds of nuts, only to re-discover them after the expiration date.
After I’ve found the appropriate mood, which is the most important thing, I fill in more and more colours and, of course, the rhythm elements, like a patchwork. Sometimes it's like an alchemical process which often takes me by surprise.
I never work on one single track until it’s finished, I work on many. Sometimes, I have up to 70 songs that are work-in-progress. When a song is finished, the real working process begins because I'm almost morbidly intent to achieve absolute transparency in a sound picture. I think everyone listening to my music, should have the opportunity, to step into a three-dimensional sound world. That means meticulously separating all frequencies so that nothing interferes.
I use a large collection of soft and hardware synthesizers. Some of my favourites are : Reaktor, Ableton Live, MicroTonic, Absynth, Massive, BitSpeek and SugarBytes. Today, there’s an almost limitless supply of machines and engines but, remember, always use your ears and not look at the lights.
After four decades, itʼs a logical progression for me to design and build synthesizers. I first met Håkan Lidbo in 2012, a genius Swedish composer and one of my favourite producers. I told him about building an app that can sample, sequence and process the sounds, all inside one hand-held box. Håkan was fascinated with the idea and within 2 years the amazing Yellofier app was born. I use this a lot with my own personal set-up and use it everywhere, always ready to capture special moments and make a whole song out of it. Whatʼs very interesting is that with each song I build in Yellofier, it has itʼs own DNA - itʼs quite unique, perhaps you hear this in the music of Yello.
If someone told me about Yellofier while I was spending days cutting up analog tapes in the 70s, I wouldn`t believe it. Imagine, that all this power and creativity could fit into my hand for the price of a cup of tea.

Registered since about 1 month
Last login on 30 June 2022