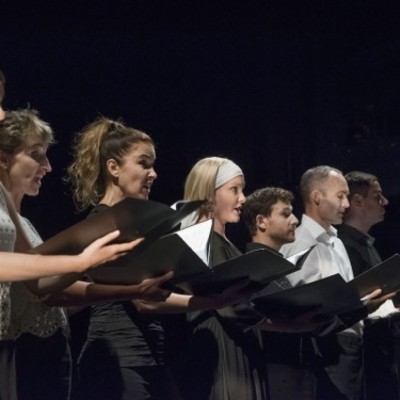 The Basler Madrigalisten are the first professional vocal ensemble in Switzerland. Founded at the Schola Cantorum Basiliensis in 1978 by Fritz Näf the ensemble has been under the artistic direction of Raphael Immoos since 2013. It performed concert tours in Europe, the USA, Australia, and Asia. A major highlight was an invitation as the first Swiss ensemble to appear at the 4th World Symposium on Choral Music and World Choir Festival in Sydney 1996 followed by a tour to Brisbane, Hong Kong, and South Korea.

The Basler Madrigalisten comit themselves equally to early, contemporary music, and Classical-Romantic repertoires. The Ensemble takes particular pleasure in experimenting in cross-over projects and endeavors to connect contrasting historical styles.

World premières, scenic performances, radio, television and CD recordings are just as much part of its extensive work as invitations to the most renowned festivals such as the Berliner Festspiele, the Lucerne Festival or collaborations with instrumental ensembles, such as the Basel Chamber Orchestra and the Zurich Opera House.

Specializing in the interpretation of contempo¬rary music, the ensemble regularly commissions compositions and presents them in première performances. The ensemble was awarded prestigious prizes for its versatile and innovative repertoire, such as the German Record Critics' Award, the European Economy Music Prize, and repeatedly the Ernst von Siemens Music Foundation Prize for the interpretation of contemporary music.

Registered since over 3 years
Last login on 25 September 2019